The Story Behind the Beak 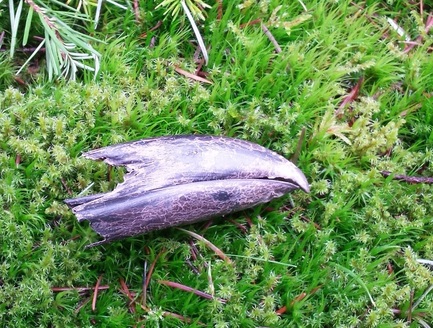 Near ten years ago Jenna and I had just met at college and soon discovered that each of us was very interested in learning the flora and fauna of our local area. We both thought we knew our trees pretty well until one day we discovered a small conifer with green/orange pointed needles. We were both stumped. We took a small branch home to identify it in our guide book. So it began, our first Pacific Yew tree. From there we started to find them all over the place, including in places we had visited many times before.

A few months later we were hiking on a rocky bluff above a large lake. The forest was very mossy and North facing. As we walked past a large magnificent tree we both stopped and looked at each other. We both thought it was a large hemlock at first, but upon close inspection we were amazed to find the largest yew we had ever seen. It was too large to reach our arms around. The tree swept out from the steep hillside and fanned up into the air. It was sloped in a way that we could walk up the trunk into the branches. We must have spent about half an hour sitting and lying down supported by the branches way above the ground. 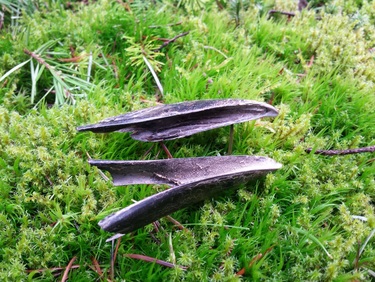 When it came time to leave we climbed down out of the tree and then slid down the slope to below the tree. There was a big pile of boulders and there was a little tunnel where were able to climb through. Under the tree was deep thick pacific northwest forest moss. Sitting on top of the moss was a perfectly preserved raven’s beak. Both top and bottom sitting together on top of the moss.  The bones and feathers had all but disappeared, but the beak was in great shape.

This moment felt to both of us like a greater force was confirming that we were on the right path and the beak was a gift to us on our journey. We each plucked a few strands of our hair to leave in exchange for the beak and continued on our way. Forever closer connected to the spirit of the yew tree and the raven. 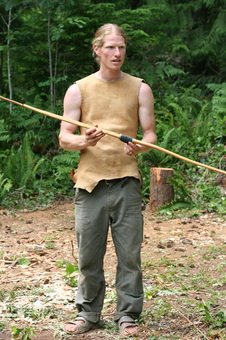 The bow has been around for millennia and used throughout the world. I consider it an honour to be continuing and supporting this tradition. I am passionate about both exploring and pushing the boundaries of what is possible with the “bent stick” and I also receive great enjoyment from researching and duplicating tried and true designs. In all these cases the goal is to use all natural materials in my creations.

Some of my most satisfying moments come when I am teaching workshops to folks on how to build their own bow (I teach three and eight day courses). There is something magical that happens when people shoot that first arrow out of a bow they have built themselves right from a piece of tree. Witnessing this moment feeds me.

I also just love listening to the wood. Working in my shop on a custom bow, picking out the piece, having some parameters, but really just letting the bow emerge from the tree. And knowing there are so many bows that are just waiting to be built.

My passion for building bows was born when I decided I wanted to build a bow for hunting. I have shot a bow and arrow for as long as I can remember and there is some disconnect when shooting a bow made with plastics and fibreglass. I learned that the yew tree is the ideal material for bow building and we are blessed to have this tree growing on the coast. I have a strong connection to this tree and honour its patience while growing and how each tree is so distinct.

While researching how to build a bow (mostly through reading a book called “The Traditional Bowyer's Bible) I found the perfect tree – a Pacific yew that had been damaged by a blown over Douglas fir, but still had a six foot section that was unmarred. I took it home, split it into quarters (the resulting pieces which are called staves), and started building my first bow. Before I was finished the first one, I was planning out the next, and I had been bit by the bug.

The pieces that really excite me when I am in the shop are the details. I love sanding and finishing the bows out so they are super silky to the touch. I love designing knotwork to burn into the back of a bow. Most of the inlay stone work is on my end as well. And there's something almost meditative about making bow strings.

While I love getting a chance to work in the shop on some bows, a lot of my energy goes towards the behind the scene work (website, email, financial, etc.).

The other work that I am passionate about is Rites of Passage. I am blessed to have a wonderful elder to work with - Wes Gietz (www.windwalker.ca) for these experiences. Healthy and supported rites of passage are experiences are needed in our lives and it is an honour to be involved in these ceremonies. Please contact me if you are interested in learning more about what they are or participating in one.